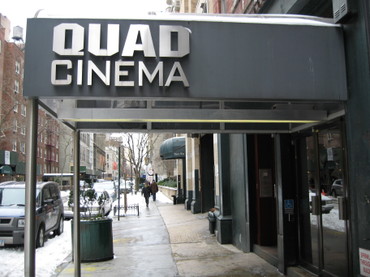 The Quad hopes to get glutes in the seats.

Took a short subway ride to Union Square and walked over to The Quad to check out the poster for Boy Culture, since it's opening there this Friday. I knew it would be a somewhat covert operation since theaters don't take kindly to photography, but I walked in and snapped a pic before the usher could sheepishly inform me not to. 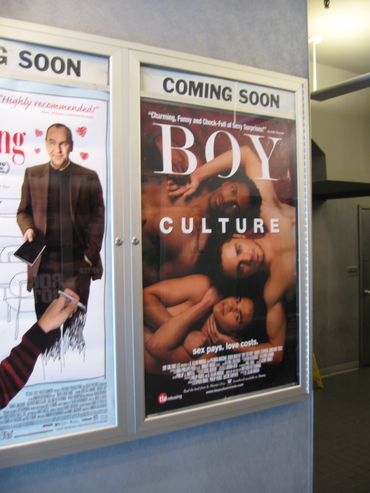 I love The Quad. It's an institution in NYC because it's where you can reliably see a lot of queer film, some good, some bad (isn't all film that way?). I remember seeing a pretty terrible gay movie there called Latin Boys Go To Hell. It felt like I was surrounded by guilty, closeted, married retirees who were hoping to rub knees with some Latin boys before going to hell. It's sometimes like that—the sexier-seeming the movie, the cruisier the audience. Which is great because they paid to get in and queer film can use the support. 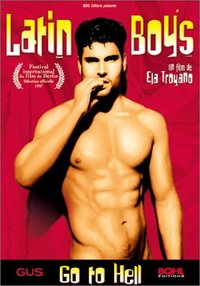 Aaron Hicklin, the EIC of Out Magazine, poison-penned an editor's letter for the April 2007 issue with Ugly Betty on the cover in which he discusses a recent news story on the premature evacuation of audiences from the gay-themed play The Little Dog Laughed. Prominent Broadway publicist Richard Kornberg had lamented, "Maybe I don't know the gay audience as well as I thought," to which Hicklin says:

"...[M]aybe 'the gay audience' is not so easily patronized as it once was. Maybe we don’t all see our lives reflected in coming-out stories that portray gay men as maladjusted, conflicted, and ultimately unhappy. That experience may be true of some of Hollywood’s faggots, but for most of us the future isn’t nearly so bleak."

(I won't go into his use of "faggots" here—my impression is that it was used to chastise people for overreacting to Isaiah Washington's fondness for the word, and implies that to object too strongly to it is to belie an internalized unhappiness.)

Hicklin's is a provocative statement. Content could play some role in the decline at the box office (theatrical or cinematic) for gay properties, whether because the property isn't very good (so it has nothing to do with gay/non-gay) or because the impact of homosexual content in film is waning.

million, I don't think that's fair. (Quotes are because I'd say the b.o. was pretty good considering subject matter and lack of a rating.) I read Hicklin's argument as a continuation of the ongoing argument that coming-out stories or gay-specific stories are not good enough for gay people anymore, that we won't patronize a film unless it's got more to it. It's in the vein of Mark Simpson's grotesque assertion (at Outrate that, "Well, homosexuality is a form of narcissism. So little wonder that gayists want to see themselves reflected in the silver screen. Trouble is, no one else does." Gruesome. Simpson's like the male Camille Paglia (wait, Camille Paglia is the male Camille Paglia.) But even if Simpson's and Hicklin's complaints are actually the opposite, they're also the same—positive or negative, gay is not enough.

Plenty of gay-specific films (they're only about being gay...) have a lot more going for them than plenty of non-gay films. Look at films like Parting Glances, Edge Of Seventeen, Chuck & Buck or Strawberry & Chocolate—trés gay, and certainly more worthy than drek like 300, which I guarantee a large number of gay people patronized despite it being only an action movie. Forgetting about Simpson's complaint and focusing on Hicklin's that dreary gay films are not the draw they once were because we're all past gay angst now, note that Brokeback Mountain became the third biggest-grossing gay film of all time just last year (that's if you count The Birdcage and Interview With The Vampire!) and its characters were maladjusted, conflicted and ultimately unhappy.

I don't see it as being strictly about content. A lot of things have happened in recent years that are far more powerful than the tiny, elitist post-gay movement. For example, a massive diversion from plays and films called the Internet, a movie box-office vampire called NetFlix and a theatrical box-office killer called, "I have to pay how much to see Johnny Galecki nude???"

I like Out. I subscribe to it. I like The Advocate and Genre, too. My likes outweigh my dislikes of all of them to varying degrees and I'm happy to support queer journalism and arts. But when they start to pontificate

on what "we" think as a community, I'm skeptical. Because as badly as movies and plays have slipped over the years, magazines are hardly bellwethers of mass taste. Using census guesswork, there are over 10,000,000 gays and lesbians in the U.S. Only 155,000 of us (last six months of 2006) can be bothered to purchase Out Magazine in a given month—only 15,000 to 20,000 of us doing so on the newsstand with the rest coming from subscriptions—according to the Audit Bureau Of Circulations. Genre had 60,000 per issue for the same period, and the bi-weekly Advocate had about 150,000 per issue...all three have grown in the past several years. If such a small number of gay people are patronizing gay magazines, is it because they don't speak to us? Maybe. Out is aimed squarely at affluent men and has an older readership than you'd guess—it's certainly not a mag for young, I-don't-like-labels queers.

But I think that there are other factors involved with gay magazines failing to attract more readers, like the sorry state of newsstand distribution in this country and a reluctance on the part of so many venues to carry gay-specific items...which also explains why gay films don't always find their audience, too, right?

I believe strongly not in loving everything that's gay-themed, but in supporting it as much as possible. We're only helping ourselves and we can bicker about the artistic merits after everyone's been paid. To that end, like I said, I buy all the gay mags I just wrote about, I paid to see all the movies I just mentioned (the good, the bad, the hellish) and I paid to see The Little Dog Laughed, too. And even when some of them left me feeling maladjusted, conflicted and ultimately unhappy, it was money well spent.