Don't Pretend You're Not Hungry: Madonna At Roseland Comments (18) 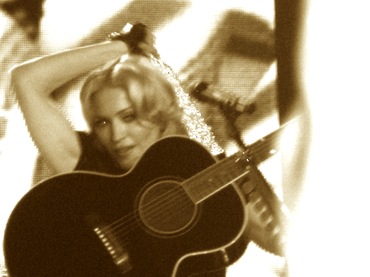 After stressing for a ticket and then lucking into getting one the old-fashioned way, last night was Madonna’s hotly-anticipated Hard Candy promo show at Roseland. There’s no way any promo show could top her 1998 Roxy appearance for me, because that came after a five-year dry spell and had not been done before—such a huge star contained within such a tiny club!—and Madonna’s emergence, unfurling from within her “Frozen” garb, felt like a spine-tingling, spooky spiritual visitation.

No dark arts this time, but if the Roxy in 1998 was black magic, Roseland in 2008 was a dazzling dose of white magic, a bit like Glinda beneficently mingling with her munchkin subjects. 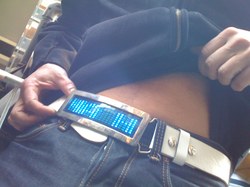 I went with three pals. We arrived at 5:30 to stand in line ahead of the 6:00 p.m. suggested arrival time, ahead of the 8:00 p.m. doors and way ahead of Madonna’s 10:04 p.m. kick-off. It was cold, but the mood was fraternal, even when Jason got separated from us in a different, sectioned-off part of the line. It didn’t last forever and he joined us with some nice, chatty guys who at various times led mini-sing-alongs, reminisced about previous gigs and/or showed off their bulges. (We were near pornstar Spike, who is a sweet pocket Madonna acolyte, not as intimidating as his oversized digit.) 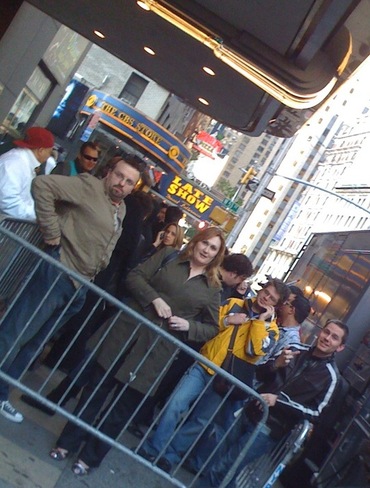 As time went by, so slowly, the line started to snake forward, and stories of fake wristbands trickled back to us...thousands of dollars wasted. They were using blacklight to inspect them and were not suffering fools. A transgendered fan who’d flown in from Israel was set aside and seemed in danger of not going in because her wristband had been on her left, not her right, wrist. This was the only evidence of unfairness from the Roseland security crew, who kept things calm and were intent on rooting out any deemed impure of heart.

We were finally let in a bit after 8, snaking past hysterical VIPs who were having difficulties maneuvering will call out front. I had two shots at tickets that way, but I’m glad I went with the wristband, which got me in faster and got us way closer to the stage 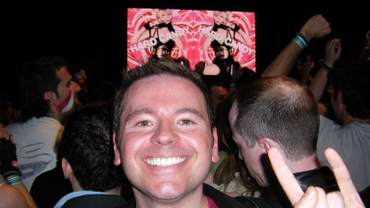 A Rolling Stones throw from the stage. Courtesy of Jason.

We spotted Fran Drescher, Rosie O'Donnel and Zac Posen—Madonna attended an afterparty at The Box with Posen and other fans-masquerading-as-VIPs. 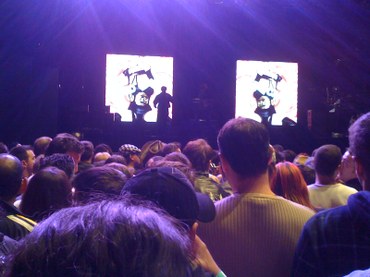 All the world's Madonna's stage. 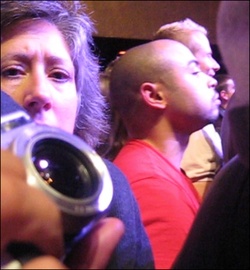 But Roseland was not so bad, nor was it without its thorns: One guy muscled in last-minute and barked at the woman he displaced, “Don’t like it? There’s the door.” (He is pictured at left, looking smug. Here's hoping he breaks a leg soon.) Some French guy behind us kept looking for ways to get around us, and his taller friend had to be told by one of my party not to even think about it, merci bien. Two Russian girls next to me pressed continuously against me as if moving sideways would help (it would be, literally, a lateral move), until one grabbed the other and was in the process of forcing her forward, which tipped me back and threatened to leave me crowd-surfing. Off balance, I grabbed her and tossed her a foot over. “Don’t do that,” I said calmly, regaining my footing. The same idiotic bitch was wearing a backpack into which she or her friend could easily have fit. Then there was the supertall, seemingly nice guy in front of us who felt the need to put his giant arm up in the air, and drape it over his head Beyoncé-style as Madonna performed. I wanted to tell him what the acid-tongued GF of one of my cousins once told me when I was sitting in front of the TV as a kid: “You make a better door than a window.” She made a better door than she did a girlfriend, because that was my only memory of her. 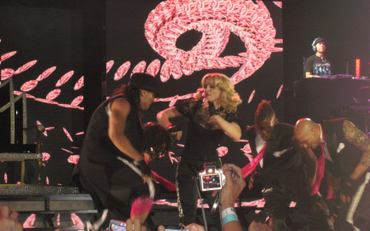 Madonna's sugar is still the stickiest, sweetest and rawest.

Roger Friedman is a fucking payola pussy for saying Mariah is the new queen of pop...she’s the reigning queen of radio is what she is, and Madonna can outsell her in concert and in single sales any day of the week. Anyway, Mariah's impact on the world is obvious without having to "dethrone" other legendary acts—why is it so important for her and her surrogates to displace accomplishments by Elvis, The Beatles and Madonna? Queens are not voted on, nor are they chosen by members of the illegitimate (FOX) press. And once their reign is established, it’s for life or until abdication. Madonna showed no signs of quitting, strutting through a hot rendition of “Candy Shop” that got things off to an ooey-gooey good start. 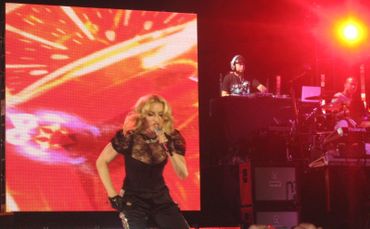 Candy is dandy but if you lick 'er, it's quicker!

Madonna looked beautiful, moved with natural grace (she’s still in peak touring form, having done this routinely since 2001) and revealed that she’s been spending all her time recently on tour-quality choreography, arrangements and concepts. She sounded great even if the backing track was prominent on the more high-energy numbers.

I was close enough to get some decent shots and video. Sometimes my poor camera wasn’t sure where to focus—nor was I, with the dancers, mobile backdrops and Madonna herself. 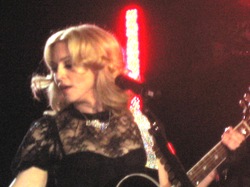 Next up was “Miles Away.” I had feared this would slow things down too quickly, but it’s mid-tempo and the sight of Madonna comfortably strumming the guitar and singing confidently a song that has to be her third single kept the pace up. This was when I got my decent shots of her, sitting still for a few minutes.

“4 Minutes” was probably the highlight, with impressive staging that could be used for an awards show or as the blueprint for her upcoming tour (September 11th is apparently the kick-off, in London). Madonna and semi-surprise guest Justin Timberlake appeared, disappeared and reappeared from behind simple, swinging panels, recreating their exciting video moves with great chemistry considering he could be her long lost abortion-that-didn’t-take. The crowd went ape for them—the crowd had earlier gone ape for the famous hits of the ‘80s being played by the DJ, so I think just the thrill of knowing Madonna can force one of the biggest stars of the day, and one of her pop descendants, to show up for a promo gig was what was behind this—we’re all just starfuckers. It was a sizzling duet. 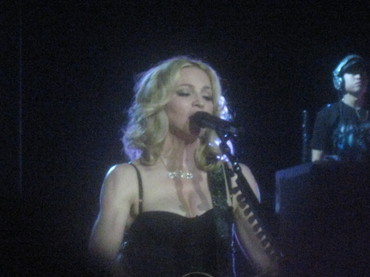 Strumming “Satisfaction” and asking if we thought we were at a Stones concert (“Fuck that!”) she then dedicated “Hung Up” to all her fans who slept out for tickets. This was her way of saying, “Fuck the present!” A nicer way would have been, oh, say, “Borderline,” since “Hung Up” isn’t old enough to be retro yet. I didn’t like the rendition much—it was rocked out in an inorganic way, and that caused her to trip over the timing on the lyrics at one point. She looked back as if to say, “What the fuck song is this again?” but then kept going. (Take note, Brooke.)

Next, she ran through “Give It 2 Me,” her next single (after “4 Minutes” finally dies down—it’s still increasing at radio and moves up to #4 this week after peaking at #3 and drifting down a few pegs), an electrifying tune that I think most Madonna fans expect to be a nice radio hit where last album’s second single, “Sorry,” failed. I wish she'd given it more of a showcase treatment, but it was dandy. 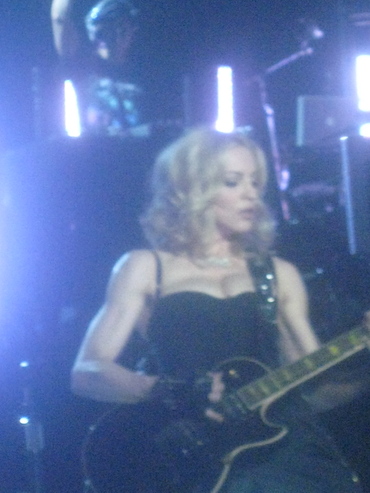 Finally, she ended with “Music.” I can do without ever hearing “Music” again. Not really, but I think it can skip a tour for sure. It’s a terrific song, one of her signatures, but it’s also quite familiar at all her live shows now. I did like the performance an awful lot and got some good video of parts of it. She closed the show with a hard out, see ya, lights up—she always does this, and yet fans still wonder if she’s kidding around and will return. Nope. But there’s really no need—she leaves nothing left unsaid in concert, which is to be expected of the greatest live performer of her generation.

After, “Beat Goes On”—quite possibly my favorite track on Hard Candy—piped in and we dance spontaneously before making our way out to the crowded street, where limited-edition posters were free for the taking. We wound down the night at Bamboo 52, where the sexy waiter told me he had no time to get me water, didn’t care about my tip due to his excess student loans and labeled himself a “ball-buster.” Considering all the stress and shenanigans that went into getting a ticket to see Madonna, getting in line to see her close up, withstanding multi-national crowding and dragging myself out to eat after 11, he was a pussycat.

Marquee, line, Rosie O'Donnell, "I Want Candy," most of "Candy Shop," some of "Miles Away" 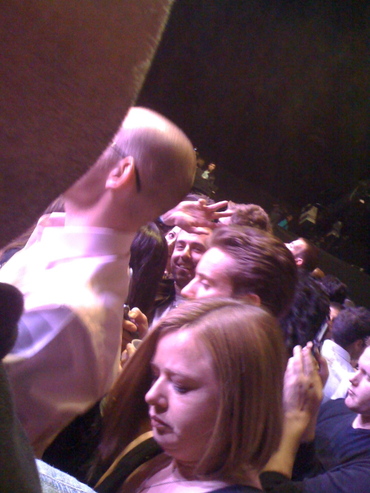 Dancer from the dance Brian waves from the overheated crowd. 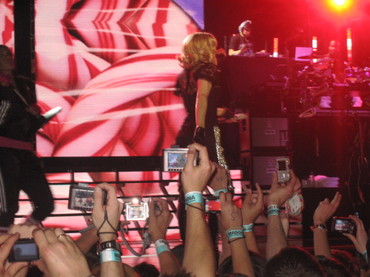 A famous Judy Garland review once noted the presence of a "third sex" in the room (or a similar term), referring to the gays. At Madonna's concert, you're lucky to find the first two. And nowadays, cameras are almost a requirement. 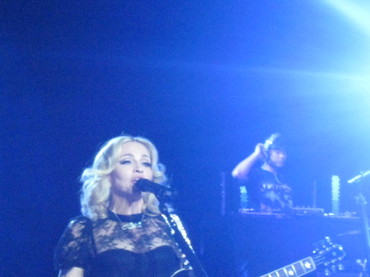 Madonna's face looks natural now, but in this shot, she definitely has a bizarre Marlene Dietrich air about her! 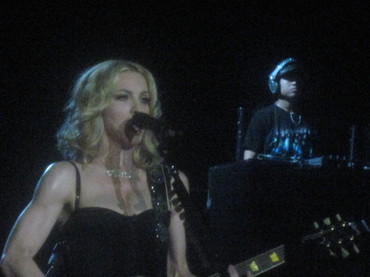 I love how the DJ is seen, too. 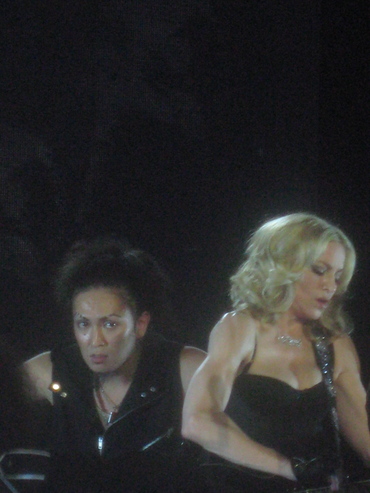 Gone are the days of Cloud and Slam. 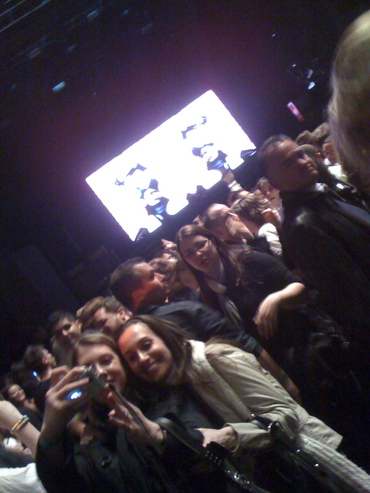 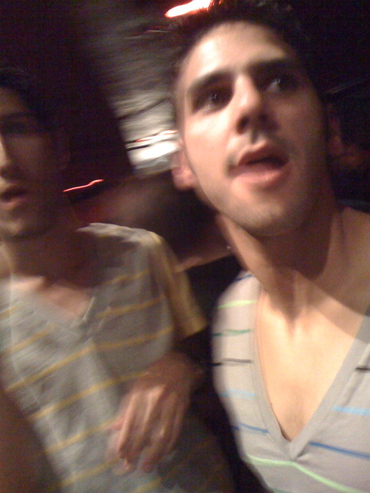 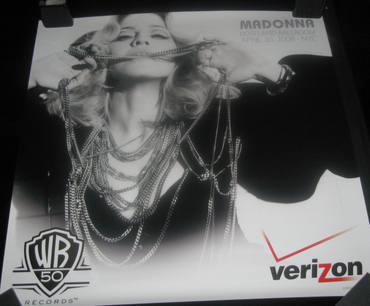 Another poster to add to my undisplayed collection of 500.