And oh, what heights we'll hit! 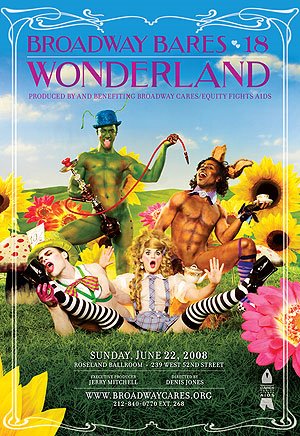 Broadway Cares/Equity Fights AIDS has no greater ally than Jerry Mitchell, the acclaimed choreographer who dreamed up its annual fleshfest, Broadway Bares.

I’d never attended the show, but finally caved in this year under pressure from my friend Jason, who assured me I’d have fun and could stick money into the pants of guys who would be as hot as go-go boys but who could actually dance.

Keep in mind I had never in my life stuffed money into anyone’s g-string. Ever! Would I chicken out?

Held at the Roseland, the event gathers hundreds of Broadway dancers, over a dozen choreographers and a few game stars to perform what is always a raunchy, themed show dreamed up with more creativity per capita (it runs only two shows) than anything On- or Off-. 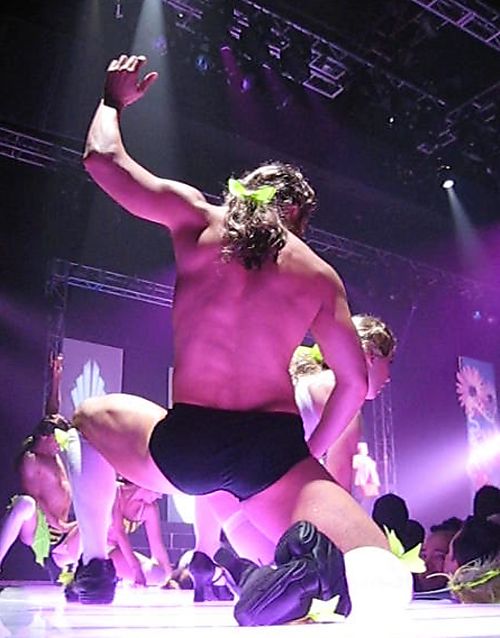 The stage is lengthwise with three catwalks—a set-up Madonna’s recent gig at the same venue would have benefited from. The cheap general-admission tickets are the best seats in the house, allowing the audience to crowd the stage and get close to the action. The guys in the audience averaged late 30s and were ready to sit through whatever it took in order to get to the rotation at the end, where all the dancers who dare crowd the stage and allow dollars (and grubby fingers) to be stuffed into their g-strings.

One chubby guy I stood near was transfixed by a smooth, giggly dancer who squatted above us, his ill-fitting g-string riding to the left just beyond some transparent gauze. This guy was staring down that kid’s winker like a caged dog eyeing an errant piece of hamburger just out of reach. That sight alone was worth the price of admission.

The theme of Broadway Bares 18 was Alice In Wonderland, which provided plenty of opportunities for fantastic and fantastically skimpy costumes, tongue-in-cheek (and anywhere else it wanted to go) sketches and star turns. Though one wonders if a number entitled “Come Inside My Hole” is really helping AIDS! 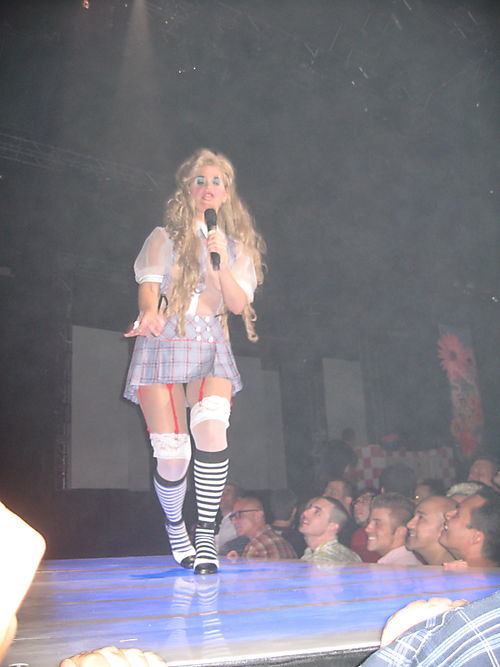 It started with a filthy take on Spring Awakening that argued how sex is natural…and made its point quite graphically. Alice, a pupil, was played by Mary Birdsong with just the right doses of piss and vinegar, dragging us through a comic sexual landscape filled with familiar faces (Nathan Lane, Julie White, Andrea Martin, Matthew Morrison) and unfamilliar (but equally welcome) asses.

For me, the best number involved Tweedle-Dee and Tweedle-Dum as imagined with the evergreen gimmick of two men seeing each other and wondering if it’s a mirror image. It was light and funny but had an extra edge considering how light makeup and wardrobe was needed to make the buff, hairless dancers into dead ringers for each other.

Yes, there were women there.

Matt Morrison did an energetic Humpty Dumpty (set to “The Humpty Dance,” of course) befitting his distant past as a boy-band member. I knew him in those days, so made a note to look for him after.

The Little Mermaid’s Tituss Burgess deserves a special mention for his fiery vocals as the black White Rabbit. I bet this hastily prepared (I assume; you can’t tell from how seamlessly it was presented) show is a lot better than his dayjob! Then there was a Joan & Christina Crawford Lypsinka tribute that made good use of Madonna's "Hanky Panky." 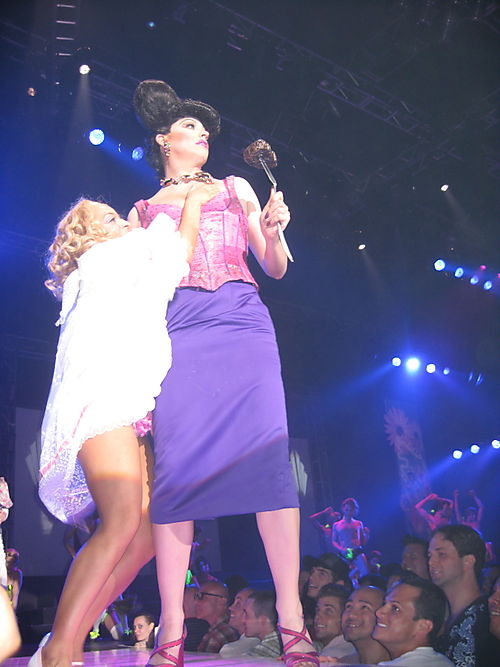 And another highlight was Nick Adams (notorious for a biceptual feud with Mario Lopez behind-the-scenes at A Chorus Line)—he’s gorgeous and commanded the stage like no one else. I didn’t realize who he was until after, but there was no forgetting him.

The show was pretty short and wound down with a too-long “thank you” session before the final pay-for-play rotation, but they’re doing something right—the organizers broke their fund-raising record this year, coming tantalizingly close to making a million dollars. There’s always next year.

But about that rotation—when all was said and done, I had no problem stuffing dollars, fives and even two tens exactly where they needed to go. I went up to the cutest guy there and waved my ten at him, saying, “You look underpaid!” He scrunched up his face and said, “You want change???” When he realized I was complimenting him, he allowed the tribute and kissed me sweetly. I could have dug for gold—the guy next to me reached so far in he pulled a shocked expression out of the jaded dancer, mumbling, “Oh, that’s dirrrty…” before leaving—but I was a gentleman. I ran into Jesse Archer during rotation, who introduced me to his hot friend. This was the first time I shoved money into someone’s pants by way of introducing myself. 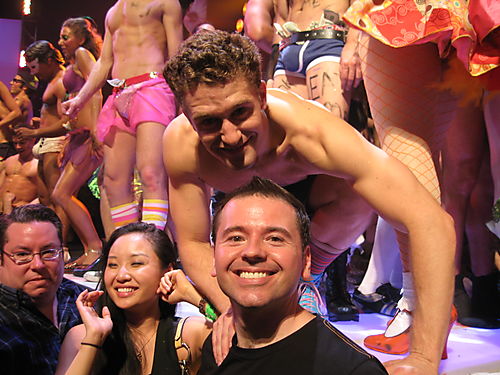 Your intrepid reporter with the gracious Matt M.

Then I spotted Matt Morrison chilling on stage in board shorts and safely insulated from the dirty business of accepting currency in his private areas thanks to a layer of dancers. He recognized me and said, “Hey!” to which I replied, “Aren’t you in that boy band…?” He grimaced and laughed, “Argh!” Testing how much of a good sport he really was, I revealed the ten in my hand and he had no choice but to stoop and accept it. I’m a perv, but I have my limits—I was very good. I can’t speak for the dozens of lurking horndogs who pounced on him after I greased the wheels, attempting to stash cash in his Deep South Pacific. Sorry, Matt! If you’re intrigued by Broadway Bares, or are a longtime devotee, there is even a book! I flipped through it and it’s worth checking out. 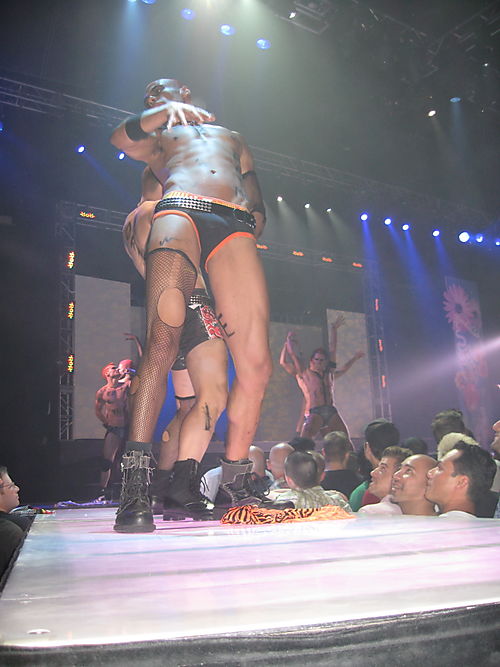 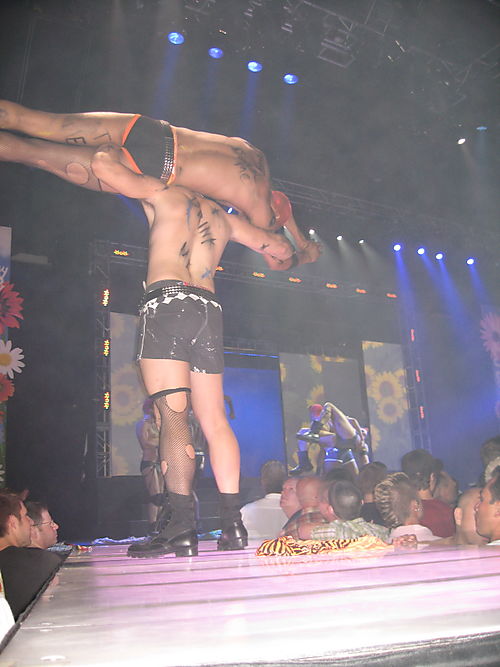 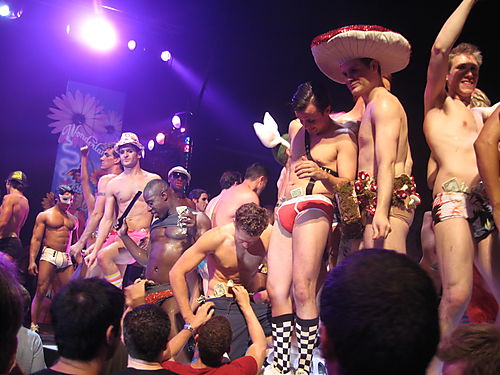 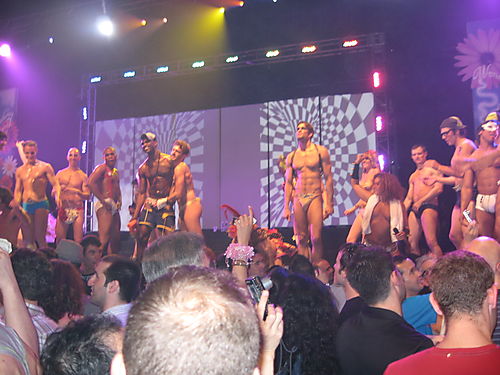 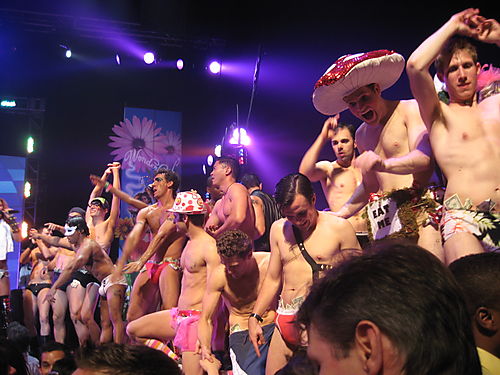 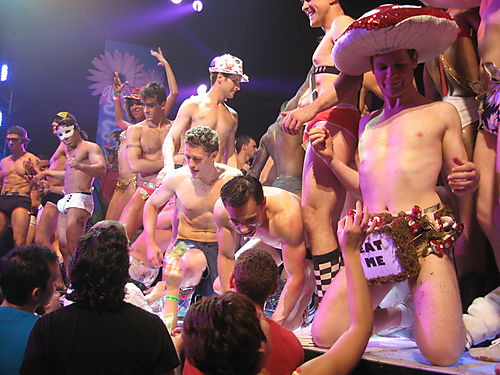