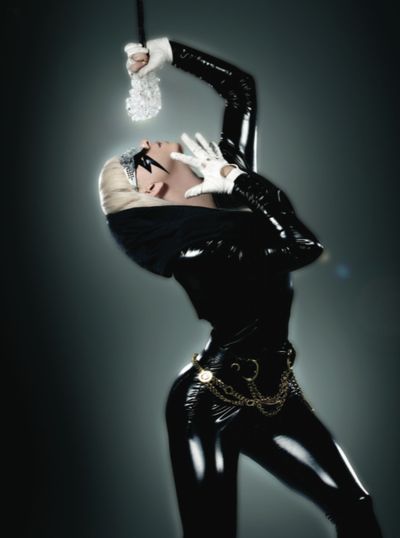 As part of my dayjob, I was invited to see this rock group The White Tie Affair opening for Lady GaGa. TWA is not up my alley (nor is it meant to be), but Lady GaGa turns out to be—I have come to like her a lot after some initial misgivings.

GaGa marches on your brain.

I first remember seeing/hearing about her just before she played the Miss Universe show in mid-2008. I scoffed—Miss Universe often has cheesy talent, but Lady GaGa seemed like some low-level dance artist to be granted so much air time. I barely watched her, if at all.
Later, as she began appearing in the media (thanks in part to Perez Hilton's adoption of her as one of his faves), I was intrigued. "Just Dance" was certainly a fun if generic song (don't get me wrong—I own my share of those), but her other tunes started crossing my path and I liked those even more: "Poker Face," a great remix of "Eh Eh (Nothing Else I Can Say)." Seeing the Pet Shop Boys use her as a stand-in for Dusty Springfield was a pretty strong endorsement, too. I had her album on my computer and listened to it more. 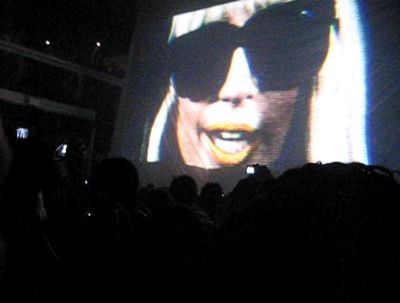 Big Sister is watching you.
Going to the concert, I had decided I liked GaGa and so was hoping not to be disappointed. Far from it—I wound up being impressed and surprised. Plus, Madonna was there!

I asked my friend Jason to come with me. We were already joking about being too old for GaGa, but I didn't feel like we'd show up and be surrounded by 14-year-olds or anything. We weren't. I would say the crowd averaged out in the mid-20s, with some teens and more than a few gay guys in their 30s and 40s. Walking up, I was shocked to see hordes of "Lady GaGawannabes"—girls (mostly) in micro minis, maxi heels and with her signature long, straight "hair." There were even some guys with matching eye makeup. I did not see anyone carrying a teacup, but the overall effect was just the first of many Madonna-esque moments.
People were begging for their promised tickets at the door—apparently lots of people believed they were taken care of but were not. I was grateful mine were there, but then again mine were left by the openers' people, so perhaps GaGa's gaggle are the sloppy ones. 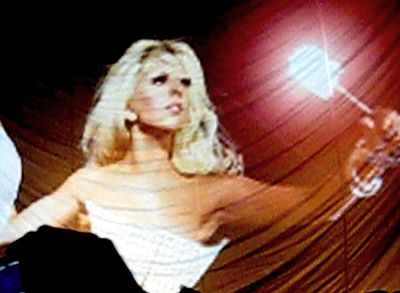 GaGa's weirdly Mariah Carey-looking projection that heralds her show's about to launch.
I love the venue—Terminal 5 is where I saw Yaz. It didn't hurt that just as I was when I attended Yaz, I was immediately recognized by a daily reader of Boy Culture (thanks, Steve, that always surprises and delights me).
As always, there were plenty of short girls with sharp elbows and no concern for who they were pushing past. You're short—it doesn't matter where you are on the floor, you're not going to see. Also, a fat jerk with four cups of beer kept pushing past us with a short female friend in tow, claiming his friends were just "over there." When someone bitched the second time he aggressively pushed past, he said, "Oh, you're at a concert," as if literally shoving people and insincerely muttering, "'Scuse me, pardon me, 'scuse me" is okay as long as someone is on a stage nearby. 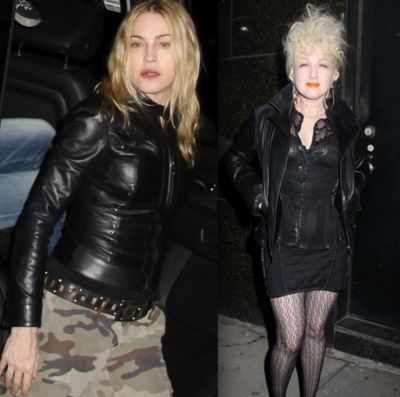 Godmothers of Re-Invention. Did they speak? Take a pic together?
No, I did not see Madonna. Nor did I see Lourdes. But they were apparently there in VIP. But Jason helped me spot both Cyndi Lauper (video below) and Zac Posen. It's funny because once he spotted Cyndi, I said, "Madonna really should be here." It made perfect sense in that moment that Madonna would want to see this ballyhooed GaGa, she's in town, she's in a musical mode (finishing three songs two of which will appear on her forthcoming career retrospective). Yet I didn't know she was there until I was leaving and Kenneth In The 212 (whose cell really is a 212) texted me to confirm it.
GaGa's show was one of the best I've seen outside of Madonna probably ever, which doesn't mean I absolutely loved every second of it, but it means that she knows how to sing and do mostly interesting (sometimes unlovely) things with her voice, but more importantly she has a smart, funny, irreverent, carefully thought out, high-concept performance. This is not your average club date, it's a micro stadium tour. Just as she did with her album The Fame and its accompanying art, Lady GaGa takes this shit seriously—she communicated in no uncertain terms with her visuals and her occasionally annoying speeches that she is in it to win it, and that she fully expects to one day be finishing three songs two of which will be appearing on her forthcoming career retrospective in about 25 years. 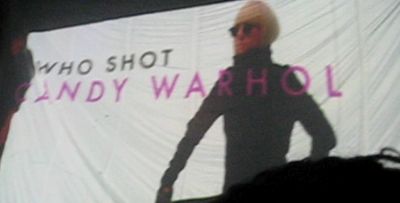 Who shot Andy? The same kids who shot the paparazzi in 3009?
The show show opens and is peppered with projections of GaGa in a laughably pretentious (on purpose) Andy Warhol salute. The fact that she is referencing Warhol again says to me that GaGa

gets herself, has modeled herself as a latter-day Superstar. It makes perfect sense that Madonna and Cyndi Lauper would be watching her show—after all, these were two women who, like GaGa, began their careers with squeaky voices (Cyndi's disappeared when she sang), were mocked and underestimated yet drew on classic images from art and popular culture in ways that attracted fans well beyond the realm of the teenyboppers. By referencing a long-dead artist, GaGa is attempting to make herself broader, to insert herself on a larger continuum of experimentation and art and pop culture than simply as another dance diva.
Also key to longevity is gay fandom. GaGa said she is against Proposition 8 and hopes to "save gay marriage," and referred to "Boys, Boys, Boys" as "a proper hello to the gay kids."
My favorite GaGa soundbyte, though, was this high-concept speech:
"Have you ever loved something so much you told a tiny, little lie? A negative truth. And you believed and you loved your new invention so deeply you would kill to make it true? Your visualization, your futurization, your self-masturbation...it's all you have, so honor it. Some say Lady GaGa is a lie. And they are right. I am a lie. And every day I kill to make it true."
Her opening song "Paparazzi" is one of her best because it's about those despised opportunists who are seen as being a part of the emptiest place in our culture, yet it has a bigger message about obsession and stalking and maybe even love. It neatly encapsulates GaGa's whole act, and definitely her tour's entire vibe.
A speech at the end of the song leads us to believe GaGa hates the paparazzi, which is interesting considering her constant courting of them. Perhaps her love/hate for the camera was best summed up by her very honest remark to her fans at one point, "You know, I appreciate that you're taking my picture but I really do wish sometimes you'd put those damn things away and just watch the show." 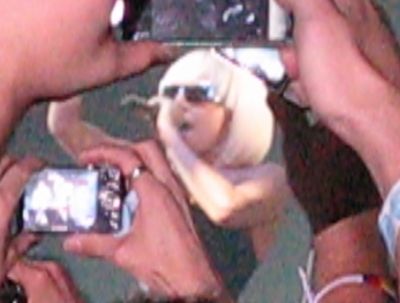 Does anything happen unless it's filmed?
I stopped filming. Briefly. 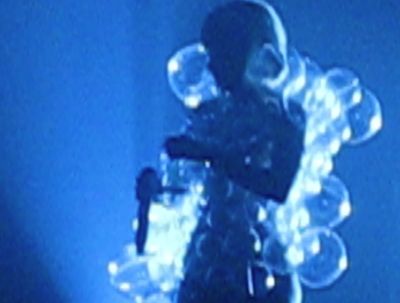 She's a popstar...literally.
I absolutely loved watching the costumes. Madonna should take note, though I hope not too literally. My favorite look was her bubble dress! (A reference to a famous stripper who used bubbles...her name, anyone? Sally Rand was fans.) I wish Madonna had thought of that first, and I bet Madonna wishes that, too. GaGa herself appeared to be inspired by Britney Spears when performing the first of her two encore songs, "Boys, Boys, Boys" (not the Sabrina song, though also a similar title to a Britney non-hot)—her flesh-toned outfit recalled Britney from her "Toxic" video. 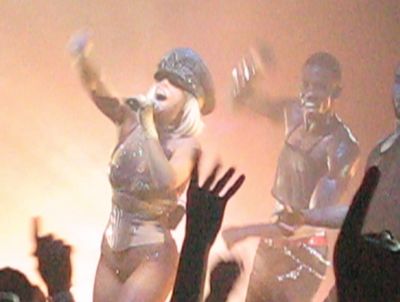 God help us...Britney's been around long enough to inspire.
Her voice often seems to have more power than Madonna's (certainly in the early years), yet there is no denying the similar tones—her "Jump" blonde wig and arch (think "Vogue") modern-dance movements add to the feeling of familiarity. But GaGa is no Madonna knock-off, no wannabe. A GaGa recipe (which I've tried to perfect before) would include Madonna, but also Dale Bozzio, Cyndi Lauper and even Jane Krakowski (I'm dying for her to do a parody).
Speaking of Cyndi, she rocked out the hardest to "Nothing Else I Can Say (Eh, Eh)," a fun and vaguely "Hey, Now (Girls Just Wanna Have Fun)"-sounding reggae tune.
I noticed that money comes up often in GaGa's show. Having already sung "Beautiful Dirty Rich," she goes on to say in her most uncannily Madonna voice, "My name is Lady GaGa, and I've got no money because I spent every dollar I make on my show."
I don't believe it when people claim money means nothing to them. Remember the Material Girl asserting this on The Virgin Tour? Or Cyndi Lauper screaming that "Money Changes Everything?" GaGa claimed "Money Honey" was the only song she's written about something she doesn't care for. Maybe it's not her motivation, but she seems well-equipped to make lots of it in the long run.
GaGa's only noteworthy weakness is that she talks too much. It was cute when she offered heartfelt thanks to New York for being inspiring, but a lot of chatter about not being appreciated came off as self-pitying and eventually literally brought the show to an unwelcome standstill, segueing into a hard-to-enjoy piano performance of some bits of "Poker Face" and a new, self-indulgent song "Future Love." Someone in the back shouted, "You suck!" at this point, but her observation that the latter song is about vibrators helped.
The greatest help is that GaGa is fully aware that her chit-chat makes her fans impatient; when the show was ending and many were probably wondering if all we were getting of "Poker Face" was that awful piano take, she announced, "I know what you're all thinking...I do. You're thinking, 'Shut up, you loud bitch, and sing 'Poker Face.'" Which she did, spectacularly.
I left thinking that Lady GaGa is a superb stage performer—I feel like she is not a natural, but is someone who has used her brain to theorize what would work for her and for her fans. She is a planner, she cares.
I do think GaGa is—like Madonna and Cyndi before her—much more interested in having an impact and sticking around than she is in simply making a quick buck. Lucky us, I bet she plans to accomplish that not by playing it safe, but by taking the kinds of risks artists have to take to not only work for 25 years, but to remain exciting.
I was telling Jason I'm scared that I have lost patience with music. I have a hard time listening to an album, or sometimes even a full song anymore. It takes too long, it moves me too little. I tend to listen to things I've listened to for 20 years, which is the same as old fogies listening to Lawrence Welk exclusively. I never thought I'd become an old-timer shaking his fist at the world and wishing music was as good as it was in the '80s—people actually do that, claim the '80s was the best time for music, apparently forgetting all the crap we had in the '80s and forgetting that while yes, "The Safety Dance" is a great song, it's not indisputably "better" than "Single Ladies."
So in deciding that not only do I like Lady GaGa, but that she is my cup of tea, I feel...relieved. Maybe there are some young(-ish) artists out there still capable of conjuring up the fan in me.