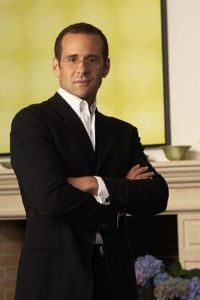 Max Mutchnick is the co-creator of Will & Grace, so you might expect him to be intelligent and witty. (Despite his past work on The Dennis Miller Show and Evening Shade.) Maybe he is, but you can be both of those things and still be capable of having idiotic opinions.

He recently wrote on HuffingtonPost a completely reactionary diatribe against the most visible celebrants during a pride parade, including "Dykes on Bikes, Tarzana Trannies, Jewish Leather Daddies and Kathy Griffin's mom." In his post, he says he loves these people, and yet he states, "They fought for my rights and taught me how to dance. But they should no longer be representing 'the pride.' It's a different time...What I'm trying to say is that 'unremarkable' mainstream people are gay, too." 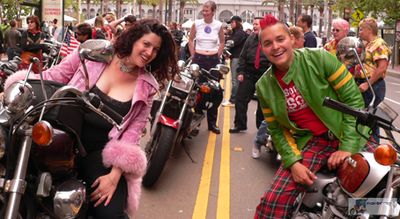 Dykes on bikes are among his dislikes.
First, you're not unremarkable and mainstream when you're worth tens of millions of dollars, have a legal same-sex marriage and are raising children. Those are all outside the norm for gay people at the moment. 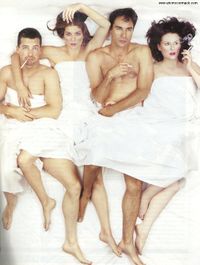 And frankly, I found Will & Grace to be pretty unremarkable and mainstream myself. I enjoyed it a lot in the beginning, and I never stopped liking Debra Messing, but overall, for me it was just some boring rich white gays whose snooty insularity was what informed the humor. It had its moments, but it was...not must-see TV. In spite of that, I wasn't embarrassed by it, nor am I unable to say that a show like that gave visibility to gay people that has paved the way for today's broader acceptance of gay issues. But it was NOT its unremarkable and mainstream qualities that did so, because to non-gay people, it was the opposite—its sexual innuendoes were remarkable and, most importantly, its flamboyant, caricatured gay buffoon Jack was anything but mainstream. 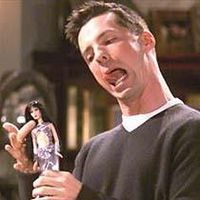 "I'm depressed. Why is this the voice speaking for me?" Mutchnick moans, referring to a hypothetical random, party-minded twink "cackling" on local TV news coverage of a pride parade. Well, I found it pretty depressing that closeted Sean Hayes wouldn't say a word about gay issues in all the years he was on Will & Grace, playing EXACTLY the kind of dumb bunny Mutchnick is so offended by. But ultimately, I didn't mind so much that that voice was speaking for me because I'm secure enough to know that there are plenty of other voices speaking for me, including my own.
Joe at Joe.My.God. says it best every year in his post about why gay people who profess to be embarrassed by flamboyance are superassholes. But it shouldn't have to be said every year.

Yes, there is an argument to be made that the media focuses on extremes in any situation, and that is bad because that bias shapes the news and shapes people's opinions. But don't act like your own voice is necessarily any more helpful to our cause or any less embarrassing for another subset of the community, because I'm pretty ashamed of your painfully limited vision expressed in your snide, egomaniacal post myself right about now, Max. 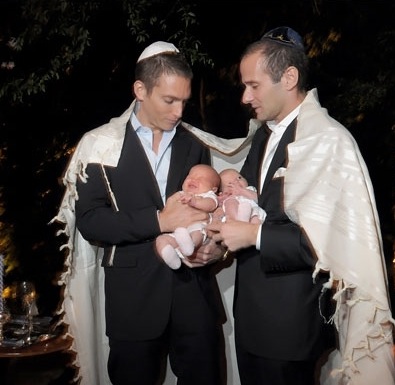 Next to normal.
The rest of the post is actually supposed to be an upbraiding of President Obama for not sticking up for gay rights as he said he would, but it never gets past the snobby 'why can't you all just be normal like myyy family?' opening, where he describes him and his husband taking their infants
to a music class and being confronted by a line of stereotypes marching toward the pride festivities. As if the wealthy, married gay parent pampering his children with an advanced class at an age when "they still think my eyeball is a toy" is not a stereotype in its own right.
Normal is not better. Being married and having kids is not better. The fight for gay rights is not a fight for us to aspire to the same, identical living situations that have driven so many straight people crazy (and enriched and edified others), it's about fighting for our rights to be whoever we would like to be with no roadblocks in place.
I have skipped more pride parades than I have attended, mainly because I personally find them boring and repetitive. Partly because I'm old and have seen them many times, partly because I don't drink, partly because I'm not single. But you won't find me attacking other people because I don't fit in with them, which Mutchnick seems all too comfortable doing.