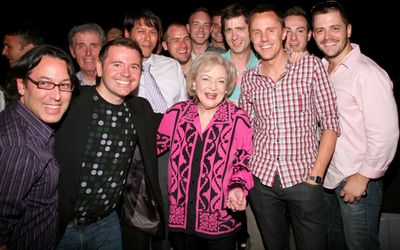 We just got back from Disney's genius (since it benefits me) Guys' Night Out event to promote the release of The Proposal, starring Sandra Bullock (who, as Kenneth pointedly pointed out, is in fact not 40 but 44...yet still not 46), Ryan Reynolds and Betty White. The concept is they invited mostly gay men and lured us by dangling an in-the-flesh appearance by Betty White before our jaded eyes. Who doesn't like Betty White? (Not counting Bea Arthur, and she's no longer with us.)

I'd shamelessly begged my Disney contact for a picture with Betty, but he couldn't promise anything. As it turned out, she didn't appear at the pre-screening cocktail party (the one to which we arrived 15 minutes early...we're so smooth), leaving us to congregate outside the IMAX theater at Broadway and 68th, feasting on the kinds of delicious, fattening hors d'oeuvres the no-waisted thirtyish muscleboys seem to be able to eat with impunity. 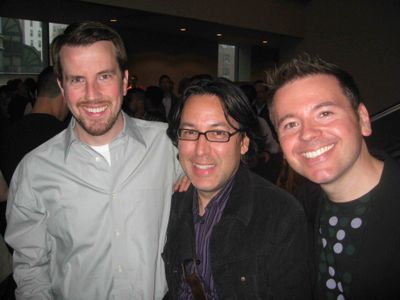 Kenneth, who just turned 42 two days ago and doesn't look a day over it (hehe...more like 32).
We met up with the aforementioned Kenneth (of KennethInThe212 fame) and his friend/contributor Marc, and struck up a convo with two cute youngsters assigned to take pictures for HX until it was time to descend two flights to the theater where the action would happen. I chose a seat on the aisle four rows back, knowing that Betty's speech before the film would occur directly in front of us. But when nobody sat in front of us, that just set us on a crash course to wind up smiling next to Betty. 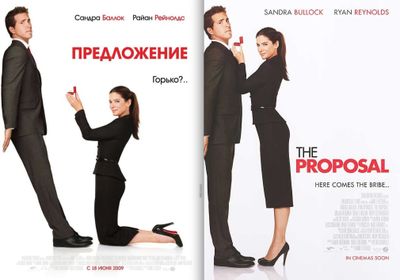 The international (L) vs. domestic (R) posters.
I realized as she made her entrance that this was really just a grown-up, gay version of Disney's recent smart "surprise appearances" promotions involving stars like Miley Cyrus and the Jonas Brothers, except without the surprise. I felt like a giddy Miley fan as Betty made her way down the aisle shaking hands with her adoring fags, I mean, fans. I held her hand as she passed and was satisfied. Her comments were short but sweet and I think her warm words about Sandra Bullock being totally down to earth and the kind of person no one ever says a bad thing about could apply just as easily to Betty. 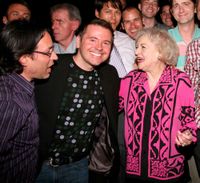 Then, as she departed, my contact more than came through, setting up a quick photo op with Betty and whichever audience members happened to be nearby—including José and myself. I was accused of jumping on Betty, but the photos reveal I was actually keeping a quite respectful distance. It was exciting to be next to someone whose work I so revere—I mean, Sue Ann and Rose are just indelible.
The Proposal turned out to be mindless fun. I really liked Sandra Bullock's performance as a bitch on heels who falls in love with her assistant after blackmailing him into marrying her so she can stay in the country illegally. (Actually, lots of ill-advised things happen in the movie, including, but not limited to, an unsupervised 89-year-old setting a fire in a wooded area, the faking of a heart attack, some wildly unsafe motorboating.) I think she and Reynolds have classic chemistry that overcomes a lot of head-scratching plot twists, and Betty White is radiant and funny—she has one of the biggest roles for a person her age in recent memory, since "that old lady dropped it into the ocean in the end." 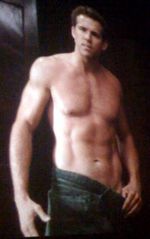 Best of all, Reynolds and Bullock get totally naked, covering the good parts with well-placed hands. Bullock is a curvaceous knock-out and Reynolds is, well, perfection.
The audience didn't seem too thrilled at the part where White's character speaks of not being around in the future; it's uncomfortable to contemplate a world without her in real life. Luckily, she seems to be in excellent shape. If the film's a hit, I smell a sequel, even if I'm unlikely to get a sequel to this wonderful photo op.