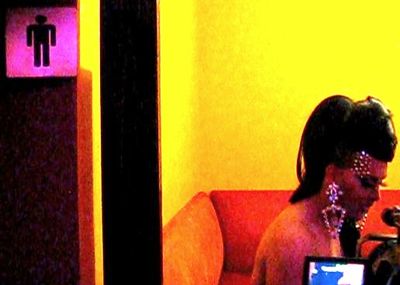 She was smokin' by the boys' room

Last night was the big party at Providence on W. 57th in NYC celebrating the season finale of season three of RuPaul's Drag Race, which—as you undoubtedly know by now—was unsurprisingly won by longtime front-runner Raja. 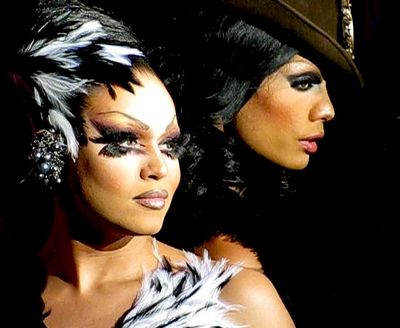 Women on the verge

I didn't do the bash, but did the preceding press event, which was probably five times or more larger than a similar event I covered last year. Nine (!) of the queens showed up (but no RuPaul and no judges) for our interviewing pleasure,

and I got to meet an adorable Boy Culture reader from Passport, a candidate for Mr. Friendly Hunk-of-the-Year who works for Networq, an A-List: New York producer (I did not smack him, and he told me he loves all the boys, especially Ryan) and saw my pals Ian and Mike and Mark and more. 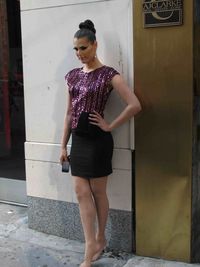 When I arrived, Raja, Carmen Carrera (barefoot!) and Mimi Imfurst were milling about outside, greeting fans. Mimi looked a bit put out that so much attention was being showered on Raja, but I think everyone knew Raja was going to win, and Mimi's look was not only fierce, it was fearsome—in a good way!—so maybe the fanboys and fangirls were a bit more shy.

Inside, we lined up to take pictures and video as the girls paraded before a step-and-repeat. A regal-looking (read: the bitch was carrying a scepter!) Manila Luzon definitely seemed to generate the most excitement, followed by a Goth Yara Sofia, looking like a gorgeous courtesan who'd just dug herself out of her grave for a second chance at life. 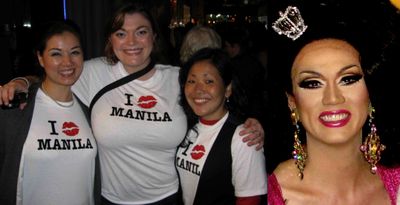 A queen and her subjects

It was kind of a Q&A S&M, which is what I call it ("round-robin" is too Tiger Beat) when you just have to grab whichever subject is closest for your questioning and/or stand in painfully long lines if others have beaten you to the punch.

Here are my thoughts, along with video—I asked each to tell me about their "last drag, first drag, best drag, worst drag" stories—to back them up: 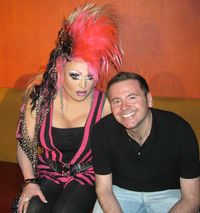 I obeyed her name and launched my interviewing with the NYC diva, or as Shangela prefers to think of her, a good place to store your drink. I liked Mimi on the show until she got a little whiny, but I liked her even better in person, and I loved her makeup. Her look was heavy-duty punk mixed with classic camp drag; she was carrying a link of chain as effortlessly as if it were a light wrap. She was gracious about the winner and looks like she's lost a lot of weight. You know you're becoming a skinny bitch when you look thinner even wearing padding. 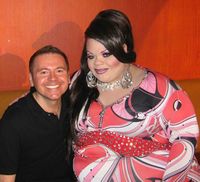 One of the sweetest on the show, and just as sweet in real life. Her look was 100 times better than anything we saw on Logo! She seemed to know some of the girls still looked down on her, but held her head up high, "I see no boogers here tonight," she told me. I was particularly drawn to her when she posed for photographers and some tipsy asses behind me were loudly laughing, seemingly at her and not with her. She's a big girl with a bigger heart. 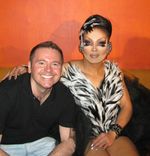 I hated that Mariah was seated in terrible lighting and that everyone trying to interview Stacy was throwing more shade on her than she'd endured during the filming, but I kind of loved that she remains feisty and rather unimpressed that Raja won.

One of my partner's faves (he flips for anything having to do with Puerto Rico, so you can guess his Top 3!), Yara looked absolutely stunning and scary as hell with her demon eyes. I was struck by how tall she is. Even factoring in her skyscraper heels, she's much more substantial than she appeared on the show. She wanted to know what I was gonna ask her before I asked her, but loosened up and gave a good interview.

She told me she loves that she has so much Puerto Rican and Latin support, so I told her to expect me to bring my Puerto Rican boyfriend over for a pic-with later, which she encouraged. (We did it outside, where she went for a smoke.) She seemed to want to clarify that she was eliminated only because she had basically already given up. Looking like Marisa Tomei at the Oscars (to steal a quote from a YouTube commenter), this raving beauty gave a kittenish interview all curled up in her booth with her husband of two years standing guard behind her. She was completely unguarded and introspective and warm, very touchy-feely as she spoke. Loved. She reminds me of Candis Cayne.

I was not a fan of Shangela's on the show, but as I've discovered over and over again, just because you've watched hours of them on TV, meeting reality stars in person is 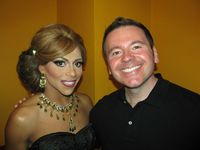 still meeting them for the first time. She was absolutely the most professional at giving answers, yet still came off as totally connected and spontaneous. She never forgot to smile, but probably doesn't have to remind herself considering she just filmed a pilot with Don Johnson, Ellen Barkin, Mario Cantone and Chris Crocker, halleloo. Most surprisingly, she heard my blog's name and began to rave about the movie Boy Culture and Darryl Stephens, who starred in it. I was proud to say I wrote the novel on which it was based and she told me it was an honor to sit with me. So yeah, I may have been big-time biased, but I came away liking her if not the very best, certainly as much as any of the ladies there. 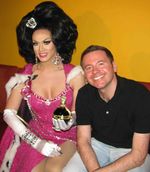 Love her and wanted her to win. The line to interview her was endless and by the time I got to her, I dare say she was three sheets to the wind. Three 1000-count Egyptian sheets, because this snatch has class, but three sheets nonetheless. She was stunning in her Royal Wedding-inspired get-up and invitingly coy with her answers.

She has so much charm, it seeps right out from under her gown. Wait, that was charm, right? At any rate, I have to say she is my fave, xo. 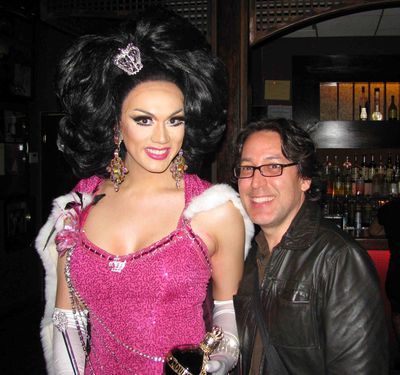 She graciously did a quick pic with José even though she was late for her dinner break. Yes, we stepped between a drag queen and free food and lived. 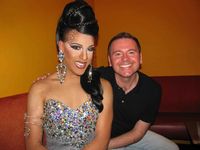 Miss Congeniality is what she was on the show, and that's what she is in real life. Quick to laugh, she seems incapable of carrying any grudges. She held court next to Shangela and at one point jokingly snapped at Ms. Wadley to shut the fuck up because she was ruining her interviews with that cackle. But it was all fun and games. She's a joy.

I liked Raja on the show in spite of that Santino-esque meanness that was always
bubbling under the surface, because I loved that she was a true model and I was rooting for the old-timer (she's 36, which in drag years is like discovering a breathing Spanish-American Civil War veteran). In person, I found her to be a bit more blasé about her good fortune than one might expect, but she had her wits about her, razzing Manila on camera. I wish I'd had more time with her, but I was her second-to-last interview so everyone was rushed. I did like that she admitted the best woman won. 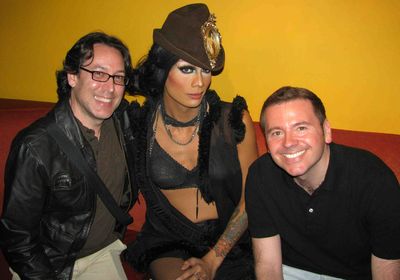 Raja changed into a dress, but bra and panties was a nice look, too

Afterward, we were eating in a diner and she poked her head in to chat with some fellow journalists (if that's what I am) who were sitting next to an open window. It was like when you go on a safari at an amusement park and a giraffe wanders over and pokes its head into your car—except we had French fries in our mouths, too, so it filled us with even more wonderment. She was off to smoke a joint, which she did, and which the entire front part of that diner did along with her. She was extremely accessible to fans outside. 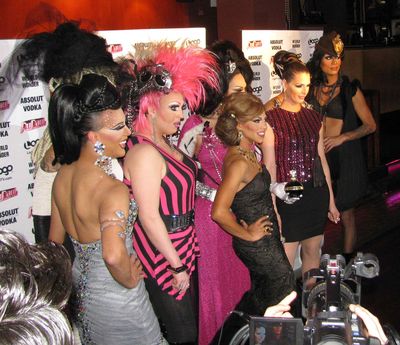 After it was all over, we were shocked by the insane line waiting to get in for the party. Considering the classy bitches tottering around on heels inside and all that fanthusiasm, I'd bet that evening was anything but a drag. 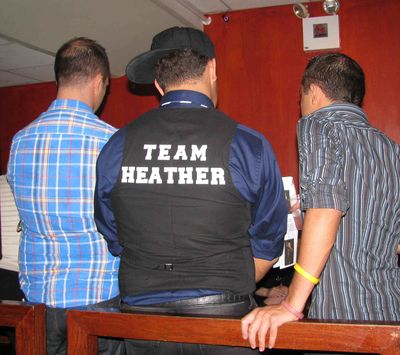 No boogers were harmed in the writing of this post