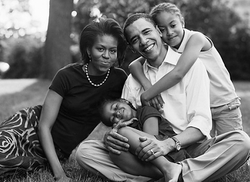 With accusations that Hillary Clinton and/or people associated with her are politicizing race, I can't help being reminded of other sell-your-soul transactions the Clintons have entered into...remember when it was revealed that Bill Clinton had advised John Kerry to get on board with the gay marriage ban to blunt the Republican turn-out in 2004? Of course, they're not alone in this kind of behavior—Barack Obama seemingly allowed a famous ex-gay and anti-gay minister to sing on his gospel tour (Donnie McClurkin), trading his integrity for a few black religious votes in key states like South Carolina.

But what's interesting to me about the Clintons' strategy is that whether planned or not, the outcome is going to be black outrage...costing Hillary black votes...followed by white indignation over that justified outrage...earning Hillary more more white votes than the number of black votes she lost. At least that is my guess.

Clearly, the incidents that have upset black voters (and, really, anyone willing to judge them impartially), are real. They were not oopsies, they were planned. The idea is to undercut Obama by reminding racist voters that he may be "clean" and "articulate" (Joe Biden's and Robert Novak's words) but he's still (whispered) black.

Obama and his camp have taken the race-bait and called the Clintons out for this unfair (and un-Democratic) behavior, and it will probably help him a lot in South Carolina. But how about beyond? I'd like to think it won't make a difference, but I'm suspicious. 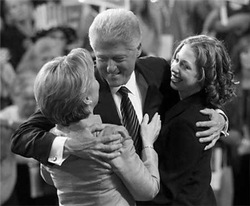 The concept of black people finding racism where it does not exist is not new—it happens all the time. But I think it happens all the time because there is so much racism out there that there are bound to be a few mistakes. And of course, human nature being what it is, there are also bound to be some people who use race as an excuse. But again, that exists as a drop in a bucket full of people who are calling it as they see it—and as it is.

Nothing annoys a white person about a black person more than complaining about racism. It's a reminder of the reality of racism, and of the fact that every white person, even those who are not exactly living the high life, has benefited in some way from racism and that every black person, no matter how prosperous, has suffered in some way because of it. Still, I continue to read comments on forums from non-black people defending the Clintons by saying, "Oh, so if you criticize Obama it's all about racism?" even though Obama is not crying racism over Clinton's attacks against his views, he's asserting racism specifically over race-charged remarks.